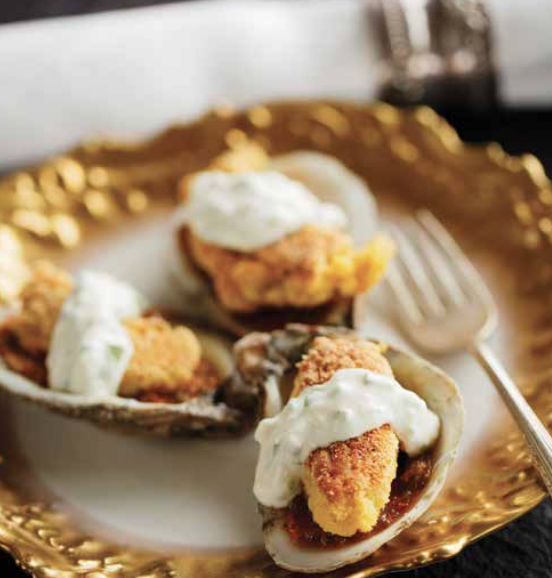 Bring the Fustini’s  Vinegar to a simmer in a small sauce pan over medium low heat and reduce by half, swirling often, 6 to 8 minutes. Let cool to room temperature.

Place the jalapenos, shallot, sour cream, cream cheese, and heavy cream in a small bowl and mix well. Add the Fustini's Cilantro and Onion Olive Oil and a tablespoon of the jalapeno balsamic syrup and mix well. Season the cream with salt and pepper.; Keep refrigerated until ready to use.

Heat the Fustini’s Cilantro and Onion Olive Oil in a medium sized pan. Roughly chop the red peppers and add to the hot oil along with the shallot. Cook the vegetables over medium heat, stirring frequently until soft, 8 to 10 minutes. Remove from the heat and add the jalapeno cream, the cilantro, and the Fustini’s 12 Year White Balsamic Vinegar. Blend to a liquid in a blender and push through a fine mesh strainer. Keep warm until ready to use.

To Serve: Place a small dollop of red pepper coulis in the bottom of each oyster shell, top with a corn fried oyster and another dollop of jalapeno cream on top. Garnish with thinly sliced scallions.

Shuck oysters and separate the meat from the shell. Reserve the meat, liquid and shell separately. Place the cornmeal in a small bowl and season with salt and pepper. Place the flour in another small bowl and the beaten egg in a third small bowl. Bread the oyster meat one at a time by dredging in flour and shaking off the excess, then dipping in egg, allowing any excess to drip off, and then rolling in the cornmeal.

Heat the vegetable oil in a large sauté pan over medium-high heat. Once the oil is very hot, fry the oysters quickly in the oil turning only once, cooking 30 seconds to 1 minute on each side. Remove from the oil and drain on paper towels briefly.