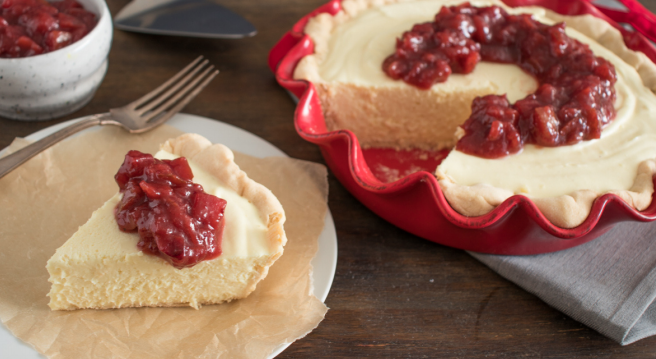 Par-bake the pie crust according to the instructions on the packaging (about 10-15 minutes, using parchment paper and pie weights to keep the crust from puffing up too much in the center). Remove from the oven and set aside to cool completely.

Place water in a medium bowl and sprinkle with gelatin to bloom (dissolve and thicken). Place eggnog, sugar, cornstarch, rum and salt in another medium saucepan and whisk to combine. Bring to a low simmer on medium-low heat and add in the gelatin. Whisk just until gelatin dissolves and set aside to cool slightly. Meanwhile, whip heavy cream (using an electric mixer fitted with the whisk attachment or a hand mixer, also fitted with the whisk attachment) until stiff peaks form. Once the eggnog mixture has cooled slightly, add whipped cream and gently stir to combine the two. Spoon filling into the par-baked pie crust and refrigerate until firm.

Serve pie with compote (on the side or garnish on top).

Combine compote ingredients in a medium saucepan (balsamic, pears, apples, cranberries, brown sugar and cinnamon) and bring to a simmer. Simmer for 8-10 minutes or until fruits have softened and the sauce has thickened slightly. Set aside to cool.