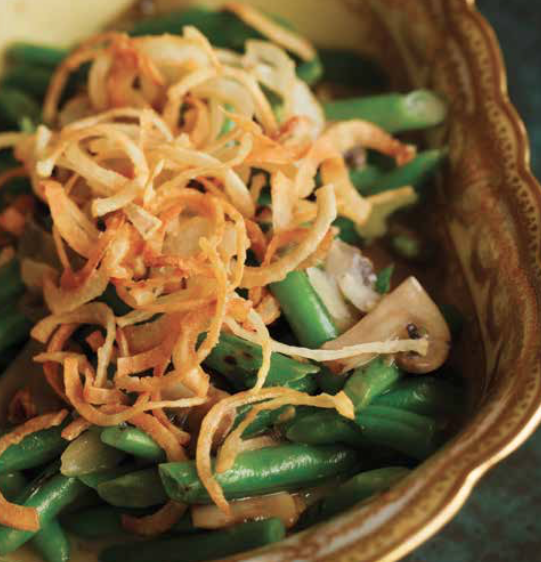 Preheat oven to 375°. In a large skillet over medium heat, heat oil. Cook onions until slightly golden and tender, 4 to 6 minutes. Remove from skillet and place in a medium bowl. Toss with Panko until coated and season with salt and pepper.

Prepare an ice bath. In a large pot of boiling water, add green beans and cook until bright green and crisp-tender, about 3 minutes. With a slotted spoon or tongs, quickly transfer green beans to ice bath to cool, then drain and transfer to a large bowl.

In a large ovenproof skillet over medium heat, heat oil. Add onions and cook, stirring occasionally until tender, about 5 minutes. Add mushrooms and season with salt and pepper. Cook, stirring often, until mushrooms are golden, about 5 minutes more. Stir in garlic then transfer mixture to the bowl with the green beans.  Cut butter into tablespoons and melt in the same skillet over medium heat. Whisk in flour and cook until golden, about 2 minutes. Gradually whisk in milk and stock and bring to a simmer. Cook until thickened, about 4 minutes. Remove from heat then add green bean mixture and toss until evenly combined. Transfer mixture to a medium casserole dish. Bake until warmed through and bubbling around the edges, about 20 minutes. Top with "fried" onions and bake 10 minutes more until golden.