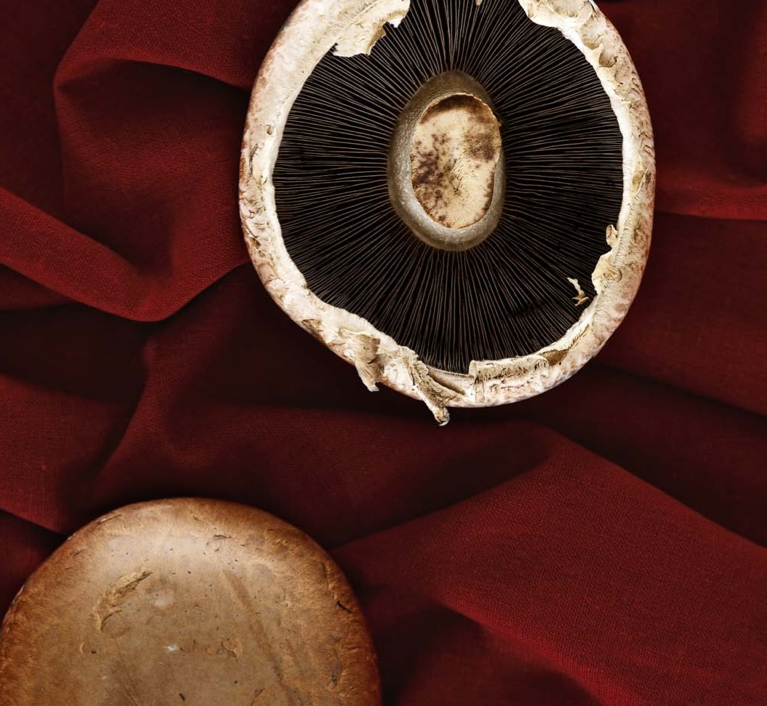 Preheat oven to 350 degrees.  Remove stems from mushrooms leaving a cavity.  Chop stems separately and reserve.  Place mushrooms, cavity side down on a sheet tray and drizzle with Fustini's Robust olive oil then season with salt and white pepper.  Bake in a hot oven until weepy and mostly cooked.  Remove from the oven and immediately turn mushrooms over then let sit to room temperature.  Reserve any liquid from the pan and mushrooms.

Place the bacon in a skillet and render all fat over low heat.  Once the bacon is crispy, strain the fat and add Fustini's Tuscan Herb olive oil then shallot and cook for several minutes over low heat.  Add garlic and cook another minute then add chopped mushroom stems.  Cook, stirring often until mushrooms are soft and all liquid is gone.  Add Sherry and Fustini's Sherry Reserva vinegar to deglaze, scraping any browned bits from the bottom.  Cook until the liquid is mostly gone then remove from heat and add toasted bread crumbs and parsley.  Season well and stir to coat.

Stuff mushrooms with a liberal amount of stuffing and place them on a baking sheet.  Bake in a hot oven until browned and hot - 8 minutes.  Serve with Pecan Cream Sauce.

Place butter and olive oil in a skillet over moderate heat.  Once butter is melted add pecans and toast, stirring often until browned.  Add shallot and cook for another minute.  Add sherry and cook until the liquid is almost gone.  Add heavy cream and turn heat to low.  Cook over low heat, stirring occasionally until the sauce has thickened - 8 minutes.  Season with salt and pepper and use immediately.